Our Marylyn McLaughlin recently organized a much-needed weekend with dear friends, and Nashville was just the right venue for this close knit group to kick up their heels. Their trip combined immersion in the Nashville lifestyle (drinking beer and listening to country music), sampling old and new culinary traditions of the town, and learning as much as they could about country music…..all in 4 days! Enjoy Marilyn’s recap of their laugh-filled girls’ getaway weekend: 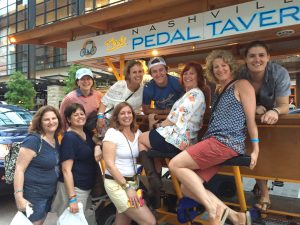 Landing in the heat of Nashville and convening at our beautiful digs, The Hermitage Hotel, we quickly plied our concierge with questions on the best boot store, where to get the true Nashville Hot Chicken, and what honky-tonks were not to be missed. The Hermitage is a genteel, old world hotel, where staff members greet  you with Southern charm and a welcoming smile, and you’re enticed to sink into a comfortable chair in its welcoming lobby or to belly up to the Oak Bar for a classic bourbon cocktail. After dancing in your boots all night, you’ll find a wonderful treat waiting at your bedside, as well as much needed bottles of water. The beds were heavenly to fall into!

What were the highlights of our trip, and what should you do with four days in Nashville?

There are a host of other things that I did not cover, such as biscuits at Loveless Cafe (which we did not get to), and having some comfort food in any of the honky-tonks. All-in-all, in Nashville, find yourself a relaxing hotel then just get out and play!